A flying start to the new year

I finally got there! France. It was visible on the horizon before we had even left Southend’s airspace and as we coasted out over Dover, Cap Gris Nez beckoned from across a shimmering, blue flat calm sea. It was mid-summer and we could not have had a better day’s visibility for getting there. I could see Calais to the left, to the right Boulogne and then the inlet that is Le Touquet came into closer focus as we flew.

‘Golf Charlie Foxtrot India Alpha. Bonjour Monsieur! We have your details!’ A delightful French accent greeted Ed’s mid-channel radio call to Lille Approach. The glide path on Skydemon tipped over to the French side and the lighthouse at Cap Gris Nez was way below. We turned down along the coast, keeping out to sea, with no sense of terror at having spent the past twenty minutes over water. It all seemed a lot closer than I might have expected, helped enormously by crystal clear visibility.

I would recommend everyone has their first go with 9999 viz, but I do know that you can still find the horizon hazy. I had opted for Ed to do the radio calls, although I had prepared myself for what he’d say, and what they would want from us.

“I’ll take you if we go straight to Dover, no detours,” he had said. So we had North Weald activate our flight plan and then changed to Southend around Brentwood. They routed us via their Gateway Port and Sheerness VRP, keeping us under 1500ft, but as we turned east, they put us under radar control, allowing us up to 2,400 ft. I found it difficult to follow the interchanges there, but when commercial traffic was told to be aware of the microlight crossing their path, Ed let out a delighted cry. “That’s us,” he laughed gleefully, as the easyJet lumbered past us.

Calling London Info isn’t always easy, but we were lucky enough to get an immediate response, with the code to squawk. Our fellow travellers behind us were on Standby at number five in the queue when they tried to call them, just ten minutes later. They didn’t want more from us, but they do ask where you are coasting out, and can ask your ETA at your next waypoint. It’s worth making sure you have enough waypoints on your route so it’s easy to find, particularly the mid-channel crossing when you change from London Info to Lille Approach.

The French were utterly charming but didn’t want to talk. Lille handed us over to Le Touquet fairly quickly, who gave us a squawk code and the runway in use, but no more. I found the crossing so much easier than I had thought but seeing the clear outline of the French coast and not having a ripple below us helped enormously. I was also grateful a fellow club member, who had not had the pleasure of a visible horizon on his trip a week earlier, had posted his flight online. I had diligently studied the path they flew, so I knew what to expect and recognised the surrounding countryside. It all feels different when you are in the air, so some sense of familiarity keeps you relaxed. I didn’t find Le Touquet’s own website very helpful, but the airfield information you find on Skydemon, particularly the VRP for both runways, made a huge difference. The runway is so long, for any microlight used to tight circuits, you could take off and land a couple of times and still have room for more!

Customs meant trundling up to two rather bored French officers, happy to exchange greetings, and then we wandered inside and waited for the others. I nearly forgot to sign the aeroplane in, but they took a card and you only paid as you left. There is Wi-Fi in the building, where you can activate your return GAR form, as your British data may not work there. We were headed into town, for Moules Frites and Ed stacked up on a bottle or two of local wine from the supermarket. The cab they arranged for us looked like he operated more as an escort but was equally amiable. It is possible to cycle into town, but even on one of the long summer days, there is still a sense of not wanting to spend too long before heading back.

As it was a baking hot day, Ed kept a beady eye on the engine temperature. “It’s pointless racing up to 6,000 ft only to have your engine overheat,” he said. “It’s called engine care.” I was in a cruise climb at around 4,600 rpm as we headed towards the channel, when he pushed the nose down and took it back to 4,000 revs, giving more airflow over the engine as it climbed to cool it down. “It’s the hottest day we’ve had, a fully loaded aeroplane – you can’t expect it to rise like a homesick angel in a steep climb. We’re in no rush, just let it cool down, then carry on climbing gently.” Going over we had been at 5,000ft and we came back at 5,800ft.

There is particular magic in seeing those white cliffs of Dover shimmering in the afternoon sunshine as you return home. They were sharply etched, rising straight up from an azure sea as we got closer and lower, reminding one why they symbolise all that is great about Great Britain.

As we coasted in, the afternoon haze had left a layer of cloud and the crisp cut-outs were gone. Kent is a beautiful county and seeing the mouth of the Thames in any light is always stunning.

It was the radio that finally got to me. Southend cheerily told us to route across runway 23 this time, at a height of 2,500 ft. No more, no less. I had had more than two and a half hours of flying. “You have control,” I said to Ed. “I want to take a photo.”  Flying in thermal heat at an exact height under radar control was not today’s lesson. “And then you can take me home.” 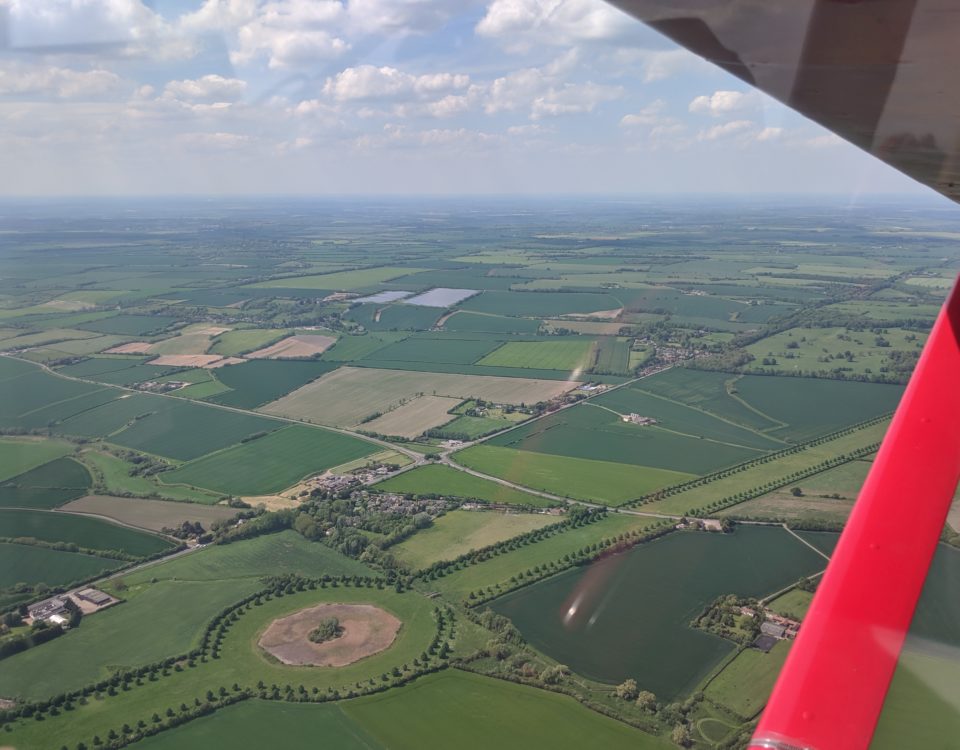