“It’s all the same! All they want to know is ‘Who you are, Where you are and What you want!’ It’s the same! You tell them that and they’ll be happy.” Ed was highly frustrated with my hesitation at going places that required talking to air traffic controllers. Ed loves the radio. He would rather go through controlled airspace than around it – “you are so much safer!”. The idea that anyone would fly a minute longer than needed to avoid talking on the radio is utterly mystifying to him.

When I sat down to prepare for my radio exam, I carefully wrote out the ‘Pass your message’ bit, complete with my full callsign and the abbreviated one.  Who I was, what I was, from where, to where and what I wanted. As a PA28 with a strange callsign on a mythical flight, I didn’t need anything extra to trip me up. As it was, I tried unsuccessfully to call an airfield that wasn’t one. I did think of pressing pause and calling for help, but instead I told the voice on the other end that I couldn’t get a reply from Enderby Airfield and was calmly told, “Well, just stay with me then.” Later the examiner told me that Enderby was simply a turning point in the exercise. Why did it have a frequency listed then? The answer is probably to give the student that moment of panic that always seems to arise when talking to someone on the radio during a flight.

And transponders? “Radio and transponder, they go together like gin and tonic,” said Ed. “You would seldom have one without the other. And if you have both, you are less likely to get into trouble.” True, and they lessen the load considerably when you can punch in a code and go, but not everyone has one and right now, the more times I can ‘pass my message’ the better.

It’s all about mitigating risk. The more you listen and know what to expect, the more you will understand what they are asking of you. Many is the time I have flown with an instructor and not comprehended a single word of the interchange with the controller. There was the day I went up to practise talking to London Information and even though I knew to say Student Pilot, Say again, – and again, and then a third time – I could not for the life of me figure out what he was asking of me. It was the day before I was heading to France, and I was supposed to be doing the radio as well as the flying. I landed in a puddle of tears and decided to call off the trip.

Of course, Ed is right. Whether it is for a MATZ penetration, an ATC or a small farm strip, it is all the same thing. And the more polite and confident you are, the more likely you are to get what you want. I have heard John ask to head through a no-fly zone because they were all on lunch, which meant we didn’t have to go the long way around. Ed cheerfully engaged the Stansted controllers about flying across their runway in a manner that would have been churlish to refuse.

There was the time I returned ashen-faced and bewildered. I had been practising my radio with Essex Radar and they had told me, “Stay out of controlled airspace!” This time John and Ed chorused, “Then you stay out of controlled airspace!” Problem is, I thought I was in it already, as I was flying in the TMZ stub. At my height, though, it still wasn’t Class D airspace. You never stop learning.

Or the time James turned to me and said, “Did you notice him say QSY, when you asked to change frequency?” In all honesty, I hadn’t. Apparently, that’s an old Q-code, that is still used by air traffic controllers.

I am constantly reminded of understanding a child just starting to speak. The words are there, but initially it’s only Mum who can figure out what Baby is saying. That’s because she’s been listening longer than anyone else. The same with radio. The more you listen, the more you hear and understand. There’s only one option. Keep listening, keep practising, until it becomes second nature. 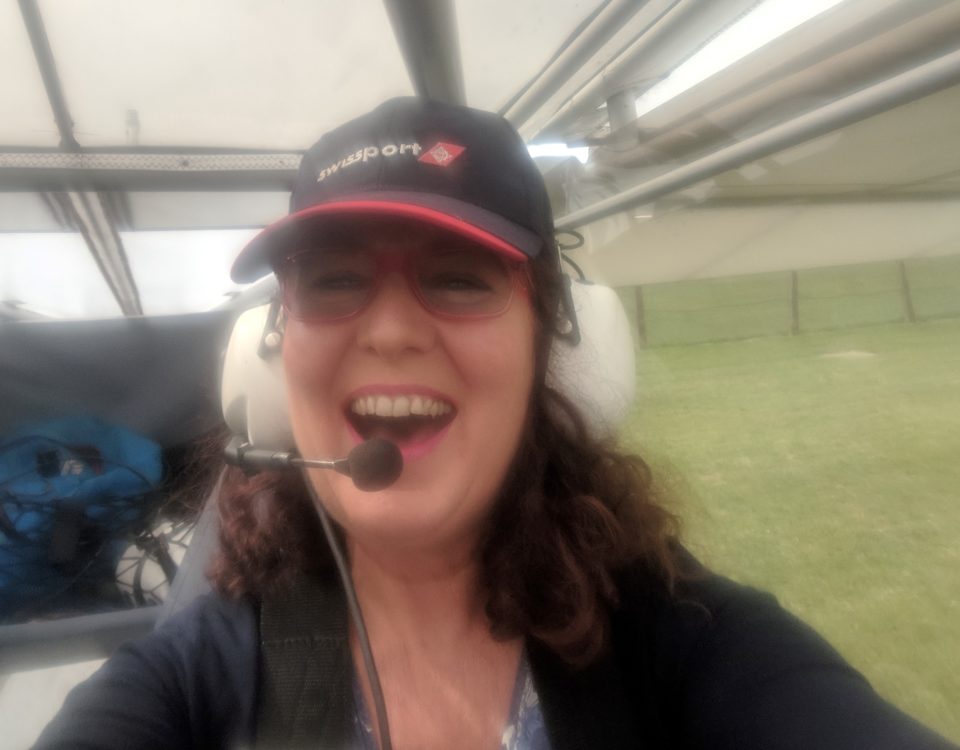